Composer. Artistic director of the CRM (Centre for Music Research) in Rome. His activity is distinguished by the interdisciplinary approach that has allowed him to direct his artistic research towards integrated art forms by combining the need for innovation of the musical language with scientific thought. His music includes works for solo instruments, ensemble, orchestra, and electronic music. 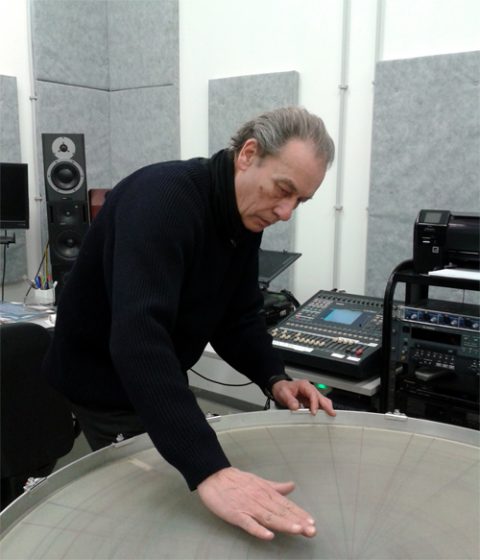 For the creation of his own works, he conceived innovative digital systems for real-time performance Fly10 (1983) and Fly30 (1989) and “augmented” musical instruments (Feed-Drum®, SkinAct, Wind-Back).

The collaboration with visual artists and choreographers such as Momo, Uecker, Moricone, Pistoletto, Bonavita, Paladino, and Galizia has marked an artistic path that has turned to the integrated use of the listening environment and has given rise to large temporary and permanent musical installations based on inventive technologies (Sound tubes, Planofoni®, Holophones, Reflecting Screens) and adaptive works which are able to evolve over time according to the environment and the interaction with the user (Lupone-Galizia 2005-2021).

In 2006, he received a commission from the Archaeological Superintendency of Pompeii to install a permanent musical installation in the “Palestra Grande” of the Pompeii Excavations. In 2015, he created the permanent adaptive musical installation “Forme immateriali” for the National Gallery of Modern and Contemporary Art in Rome. For his artistic research, he has received awards from the Budapest Academy of Sciences, the Japan Foundation, the MIUR, the French Ministry of Culture, the Carloni Awards 2013, Scanno 2016, Pleiade International Award (2019), consultancy assignments from Texas Instruments and from the Fiat Research Center. Also, and commissions from musical institutions (including Tanzhaus, Duesseldorf, Maggio Musicale Fiorentino, Teatro Regio di Parma, Kyoto Philarmonic Orchestra, INA-GRM, Festival Aujourd’hui Musique).