History | Accademia Nazionale di Santa Cecilia
This website or its third party tools use cookies, which are necessary to its functioning and required to achieve the purposes illustrated in the cookie policy. If you want to know more or withdraw your consent to all or some of the cookies, please refer to the cookie policy. By closing this banner you agree to the use of cookies.
CloseRead more

The Accademia Nazionale di Santa Cecilia is one of the oldest musical institutions in the world.

Officially founded in 1585, it has evolved over the centuries from an organization of largely “local” musicians to a modern academy and symphonic concert organization of international repute. Uniting an academic body of 100 of the most illustrious exponents of culture and music with a symphonic orchestra and chorus that are among the most internationally renowned, the Accademia carries out professional musical training and conserves an extremely rich historical patrimony, thus reflecting its own multi-century history. 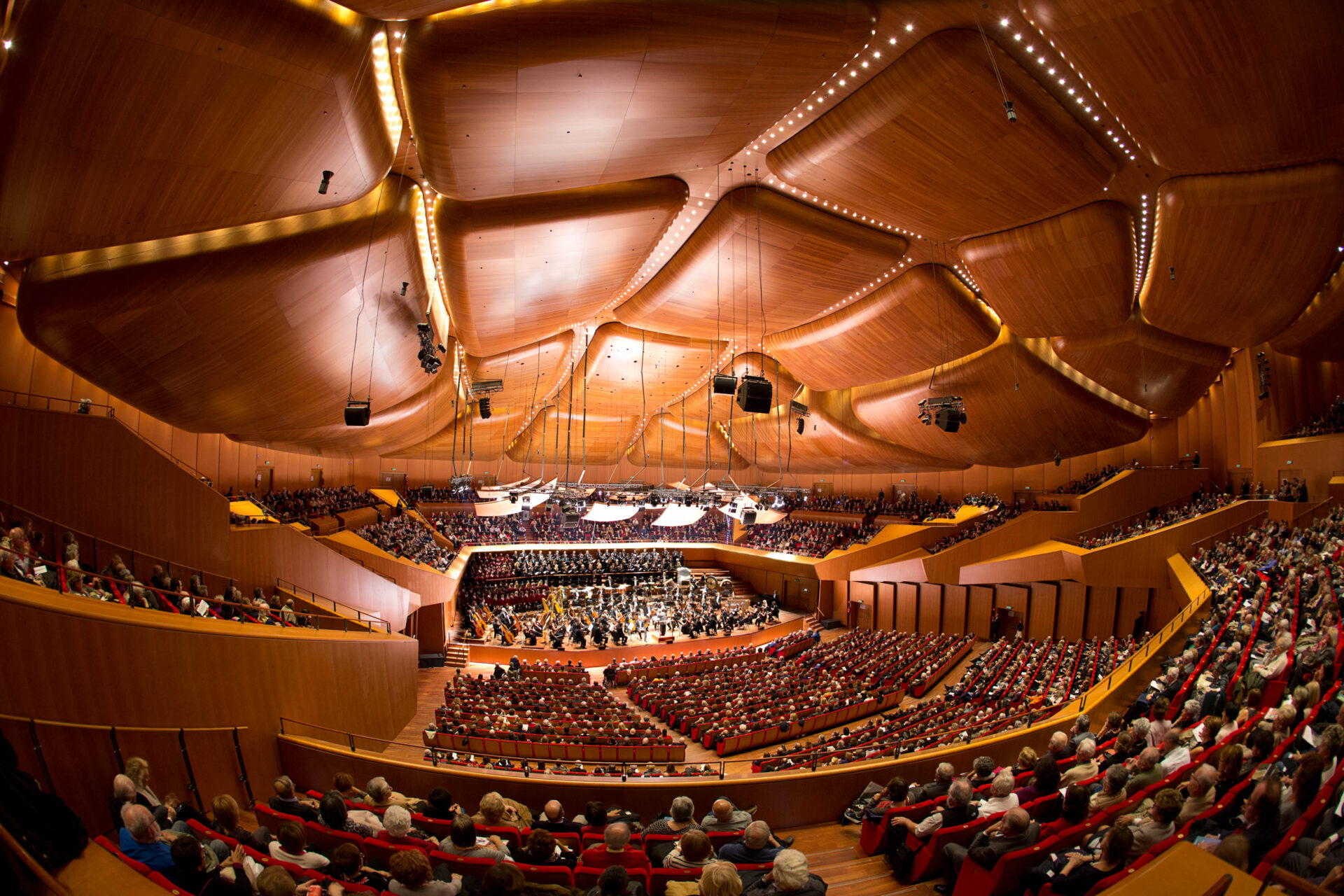 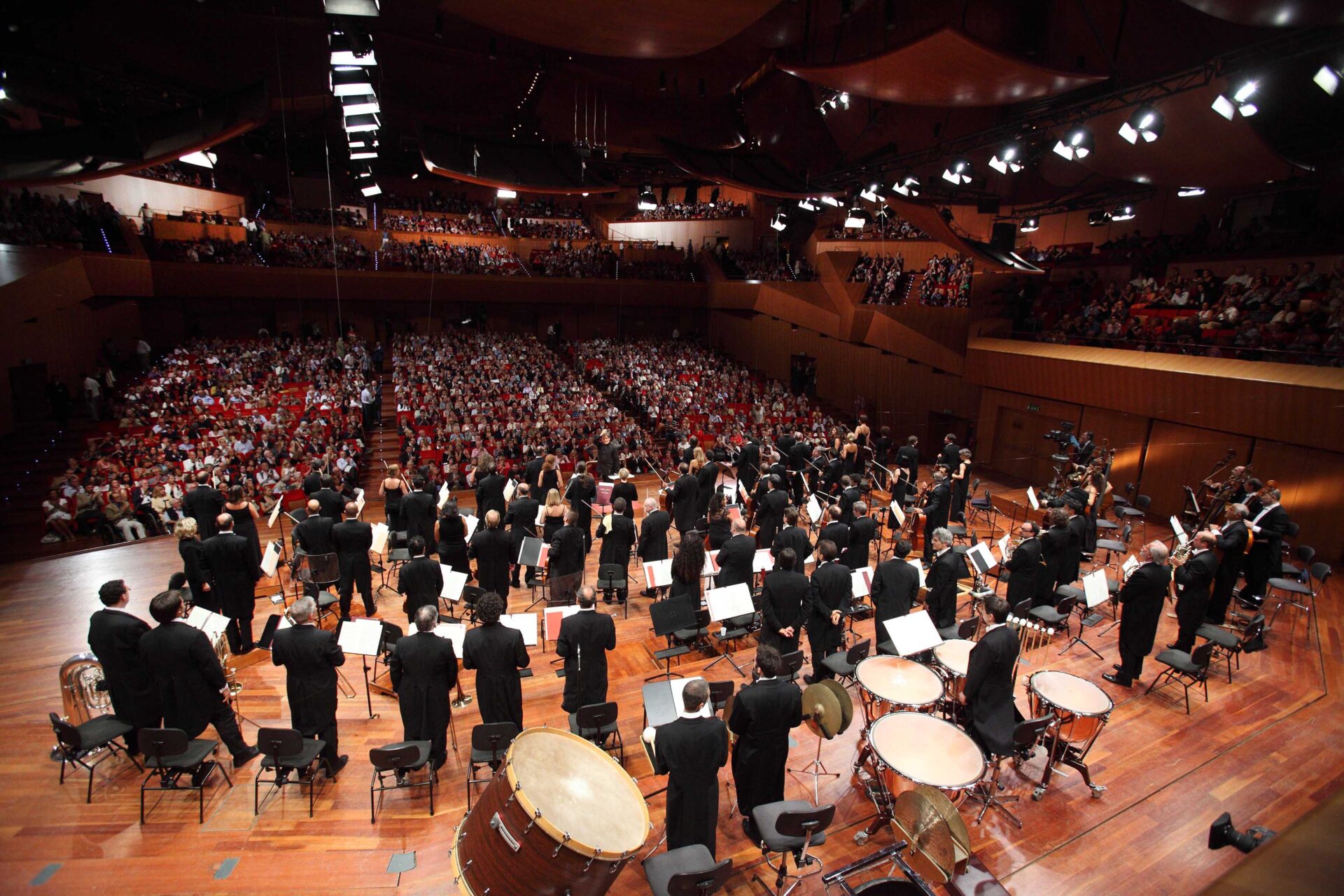 The Congregazione in its first century of existence: 1585-1685

In May of 1585, Pope Sixtus V published the bull “Ratione congruit”, the act officially founding the Congregazione dei Musici sotto l’invocazione della Beata Vergine e dei Santi Gregorio e Cecilia (The Congregation of Musicians under the invocation of the Blessed Virgin, Saint Gregory and Saint Cecilia), linking the Virgin with the two patron saints of music par excellence. Gregory the Great is traditionally credited with instituting ecclesiastical song – known as Gregorian chant – and Cecilia was the late Medieval virgin martyr gradually substituted for David in the role of patron of music. Its first seat was the Church of Santa Maria ad Martires, better known as the Pantheon. Successively, the Congregazione changed ecclesiastical base six times, from the Pantheon (1585-1622) to San Paolino alla Colonna (1622-52), to Santa Cecilia in Trastevere (1652-61) to San Nicola dei Cesarini (1661-1663) to the Chiesa della Maddalena (1663-85).

The association was already well on its way in the middle of the 1570’s, spurred by a group of musicians who consisted of the most important composers active in Rome at the time, including such notables as Giovanni Pierluigi da Palestrina, Luca Marenzio, and members of the Anerio and Nanino families. Launched as a trade association, with both artistic and charitable aims, the Congregazione soon found itself opposed by the Sistine cantors, the other important musical organization of Papal Rome; the discord continued until the end of the pontifical reign. Dissension was so lively, in fact, that it elicited the 1624 Breve of Pope Urban VIII, in which the pontiff ceded control of the profession, teaching and publishing of music in Rome to the Cecilians. It was revoked two years later under pressure from the Sistines, but most of these privileges were reconfirmed with the 1684 Breve of Pope Innocent XI.

Consolidation of its role within the Roman pontificate: 1685-1830

Finally, in 1685, the Congregazione established its own site at San Carlo ai Catinari, where the Baroque Chapel of Santa Cecilia and its adjoining oratorio witnessed secret meetings, general assemblies and splendid musical festivities until 1848. The Congregazione, subdivided into the three professional categories of chapel-master, instrumentalist and singer, subjected itself to a rigid hierarchic organization from the very beginning. The head was the Cardinale protettore (honorary president), then the Cardinale primicerio (effective president), both high prelates of the curia, who were followed by the positions of guardian, treasurer, secretary, councillor, organizer of festivities, visitor of prisoners, vestry board members and nurses – all elected by members. Some outstanding names in the Congregazione during this period were Arcangelo Corelli, Bernardo Pasquini, Alessandro and Domenico Scarlatti, Niccolò Jommelli, Baldassarre Galuppi, Nicola Zingarelli and Pasquale Anfossi.
A particularly splendid period unfolded while Cardinal Pietro Ottoboni was protector of the Congregazione (1691-1739). The 1716 Breve of Pope Innocent XI obliged all musicians working in Rome to enroll as Santa Cecilia associates. Another event worth noting was the 1774 nomination of the first female associate, composer Maria Rosa Coccia.
Towards the end of the century, a new pontifical Breve signed by Pio VI in 1794 ratified once again the privileges of Santa Cecilia associates, as they confirmed their loyalty to the papacy during one of the Papal State’s most difficult eras, affected as it was by the winds of revolution blowing through Europe.  The minutes of the Congregazione dated 17 July 1797 are the last before a pause in its official activity. Aside from a brief parenthesis documented between 1803-09, it was not to resume regular activity until 1822, with the advent of the Restoration.

From Congregazione to Pontificia Accademia: 1830-1870

The 1830 election of Luigi Rossi to the post of secretary of the Congregazione inaugurated a period of great changes, solidifying the Accademia as an institution of true international stature. With the decision to open membership to previously excluded categories (poets, dancers, musicologist-philologists, musical instrument makers, editors, and even sovereigns and ambassadors in the capacity of patrons) and thanks to the collaboration with Gaspare Spontini (who was in Rome between 1839-40), Rossi launched a profound reform of the Statute, transforming the Congregazione first into the Congregazione and Accademia (1838) and then into the Pontificia Accademia. All the major exponents of the European music world of the day were enrolled as honorary associates, including: Cherubini, Morlacchi, Mercadante, Donizetti, Mayr, Rossini, Pacini, Paer, Paganini, Spohr, Auber, Adam, Baillot, Liszt, Cramer, Thalberg, Czerny, Moscheles, Mendelssohn, Berlioz, Thomas, Halévy, Gounod, Meyerbeer; the ballerinas Maria Taglioni and Fanny Cerrito; the actress Adelaide Ristori; and librettists Jacopo Ferretti and Carlo Pepoli. Among the sovereigns were Queen Victoria of England and her consort, Albert; William IV of Prussia and his wife, Elisabetta Luigia, and the rulers of Naples, Ferdinando II and his wife, Maria Teresa Isabella of Austria.

Along with all these innovations, the Accademia continued to face the usual problems: rivalry with the Pontifical cantori (led by Baini) and from 1824, with the Accademia Filarmonica Romana; the ongoing search for a home (after the revolutionary parenthesis from ’48 that saw the Santa Cecilians siding with anti-pontifical forces for the first time) which was established in Palazzo Camerale on Via di Ripetta in 1853. But certain long-standing problems were being faced with a new spirit: musical instruction, for example, laying the foundations for the institution of a music school; or assistance for members, for whom an Instituzione di Beneficenze or “charity institution” (later a Cassa di mutuo soccorso or “mutual aid fund”) was set up at the Cassa di Risparmio di Roma.

Beginning with the unification of Italy, new and diverse peregrinations awaited the Regia Accademia di Santa Cecilia. The search continued for a suitable site for the burgeoning concert activity focused on the symphonic, chamber and choral repertoires which had begun in 1895 with the founding of a stable chorus and orchestra and the start of regular concert seasons which have continued to the present. And though its offices, first housed as guests in the “Ferro di cavallo” (“Horseshoe”) in Via di Ripetta along with those of the Accademia Filarmonica Romana and other institutions, were to soon find a definitive home within the ex-Orsoline Convent on Via Vittoria, the concerts themselves were to move from the Sala Accademica (1895-1908) to the Augusteo (1908-1936) to Teatro Adriano (1936-46). 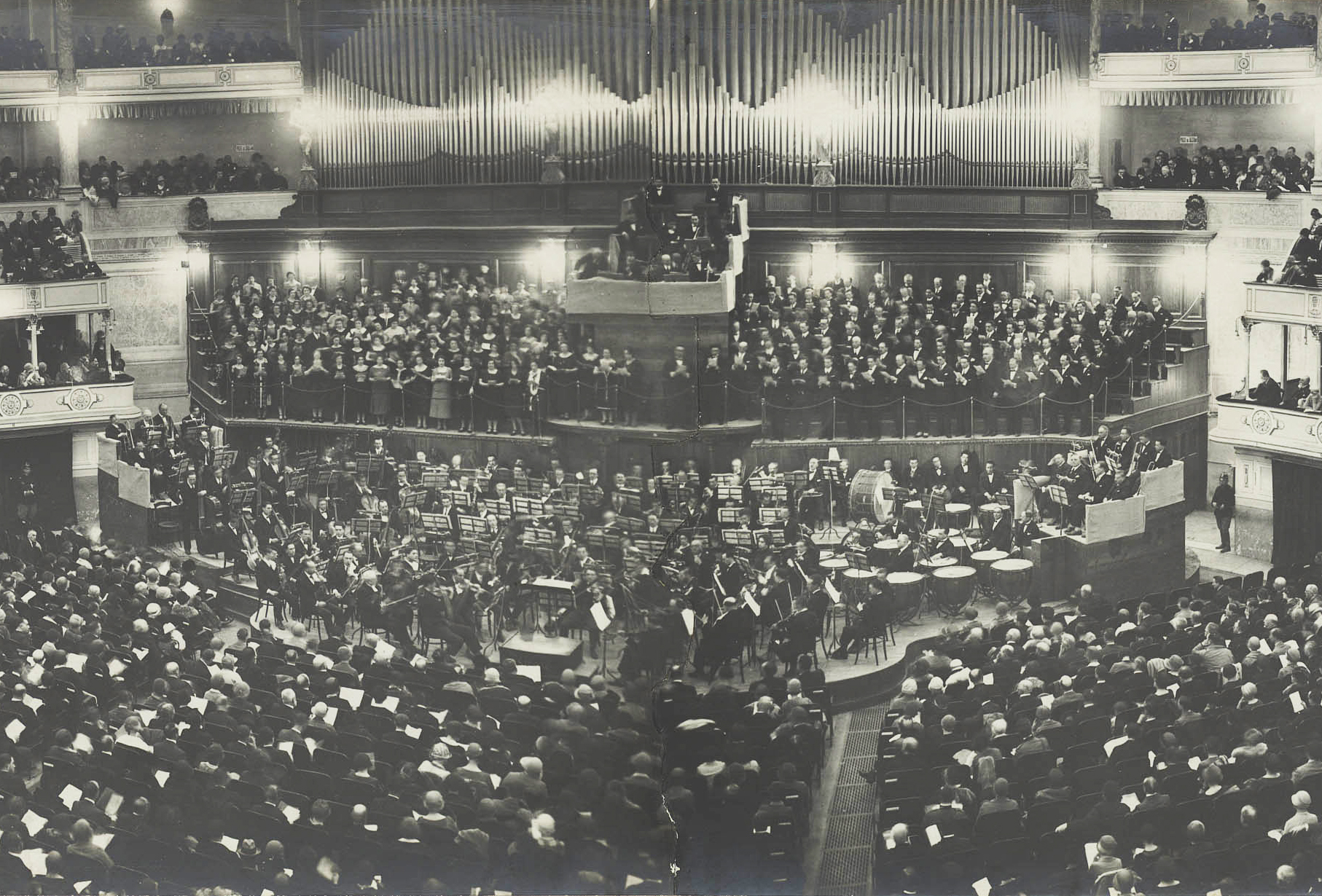 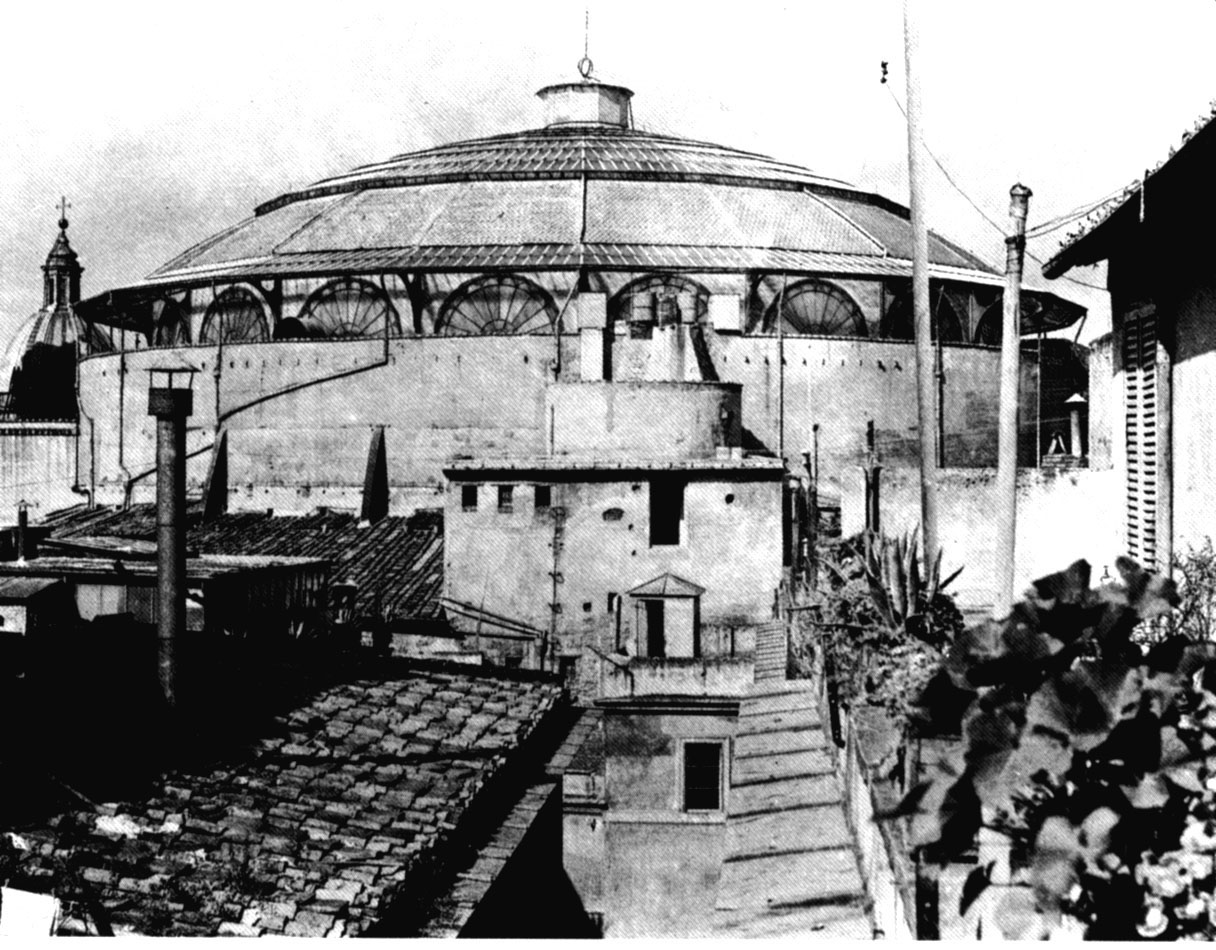 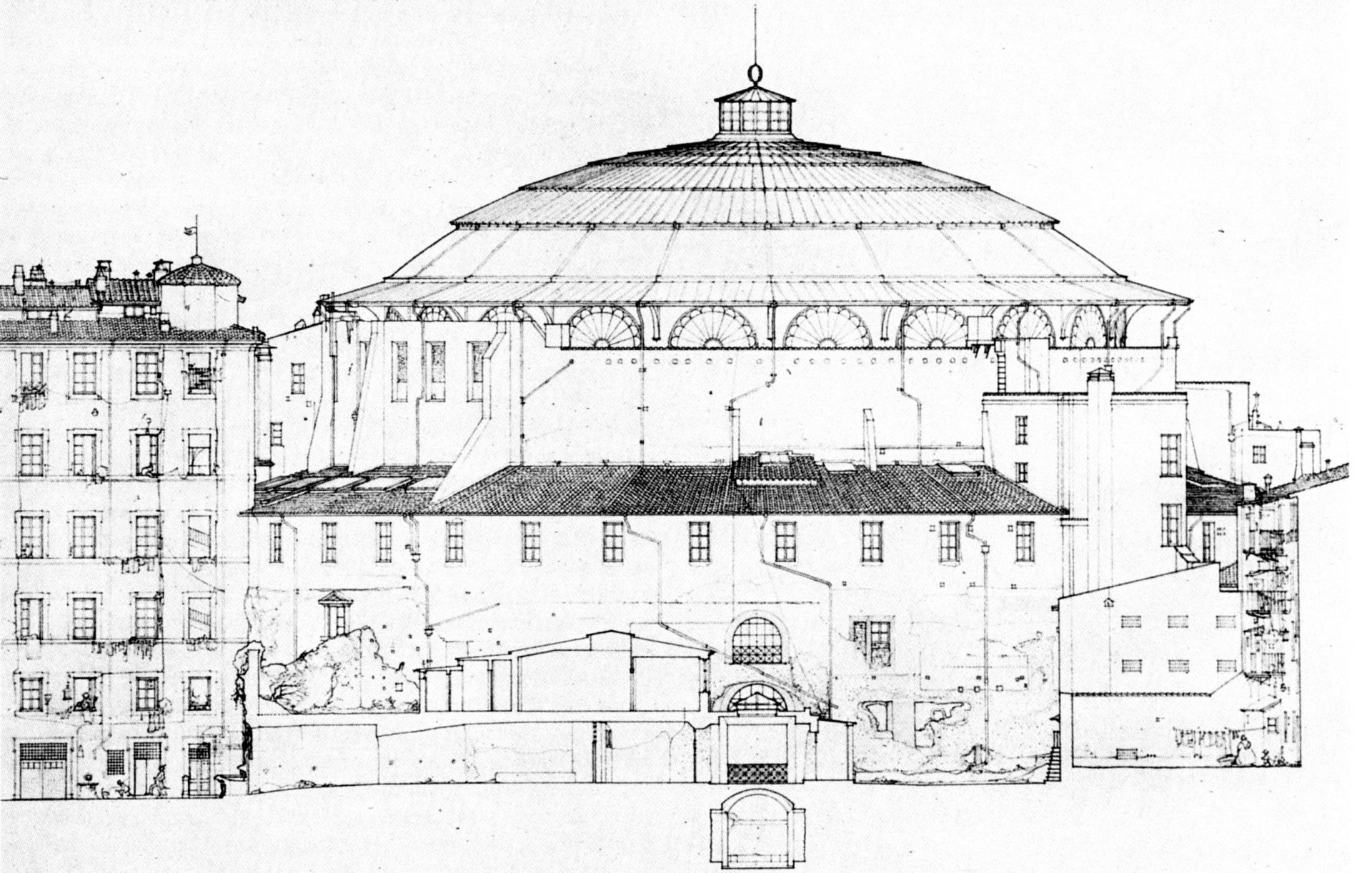 In just a few years, the Accademia passed through other, profound changes, impelled by the support of the Savoy government and by the 1895-1949 presidency of Enrico di San Martino, a leading figure in national and international stage and cultural politics from the end of the 19th through the first half of the 20th centuries. The Santa Cecilia music school (which became the Conservatorio), the library, the high-level specialisation courses, the Regia acting school “Eleonora Duse” (which became the Accademia Nazionale d’Arte Drammatica “Silvio D’Amico”), and the Scuola Nazionale (later the Centro Sperimentale di Cinematografia) were founded under his guidance, thanks to a sort of mandate for the performing arts obtained from the government at a national level. As concert seasons were developed and consolidated with stable artistic ensembles and a large number of subscribers, the Accademia wound up assuming an aspect unique for its genre, which it still preserves today even after cutting ties with many of the entities and schools that were founded along with it.

After the Second World War, the Accademia – by now Nazionale – began a new period, characterized by a change at the top: the Count of San Martino (who died in 1947) was succeeded by Ildebrando Pizzetti, Alessandro Bustini, Renzo Silvestri, Guido Guerrini, Renato Fasano, Mario Zafred, Francesco Siciliani, Bruno Cagli, Luciano Berio, Bruno Cagli and Michele dall’Ongaro. A place for concerts – the dominant problem – was temporarily established at Teatro Argentina (1946-58), while the Accademia awaited the outcome of an architecture competition (1952-54) that was supposed to resolve this recurring dilemma. When the competition failed, the Auditorio Pio on Via della Concilazione became guest hall for the 1958-59 season, and so it remained until the end of the century. In 1967, the Legge 800 (a law reforming the Performing Arts) instituted the Gestione Autonoma dei Concerti della Accademia Nazionale di Santa Cecilia, a public entity charged with organizing and managing the concert seasons, recognizing as well the Accademia’s particular position in the divulgation and diffusion of musical culture in all its forms (concerts, conferences, publications, custody of the historical patrimony and superior musical instruction). The Accademia and the Gestione Autonoma are presided over by the same President (who is also superintendent and artistic director), and who is elected by the academicians from their own ranks.

The Accademia is the only example among Italian academies originating in the Renaissance to have assumed the form of a productive modern organisation. The current Accademia (which became a foundation in 1998) is flanked by an academic organization with 70 active and 30 honorary members that includes the most prominent Italian and foreign musicians, and a symphony orchestra and chorus known and appreciated throughout the world. Thus, it unites activities promoting the culture and heritage of music with a superlative didactic tradition, and above all, with internationally famous concert programming in continual expansion. 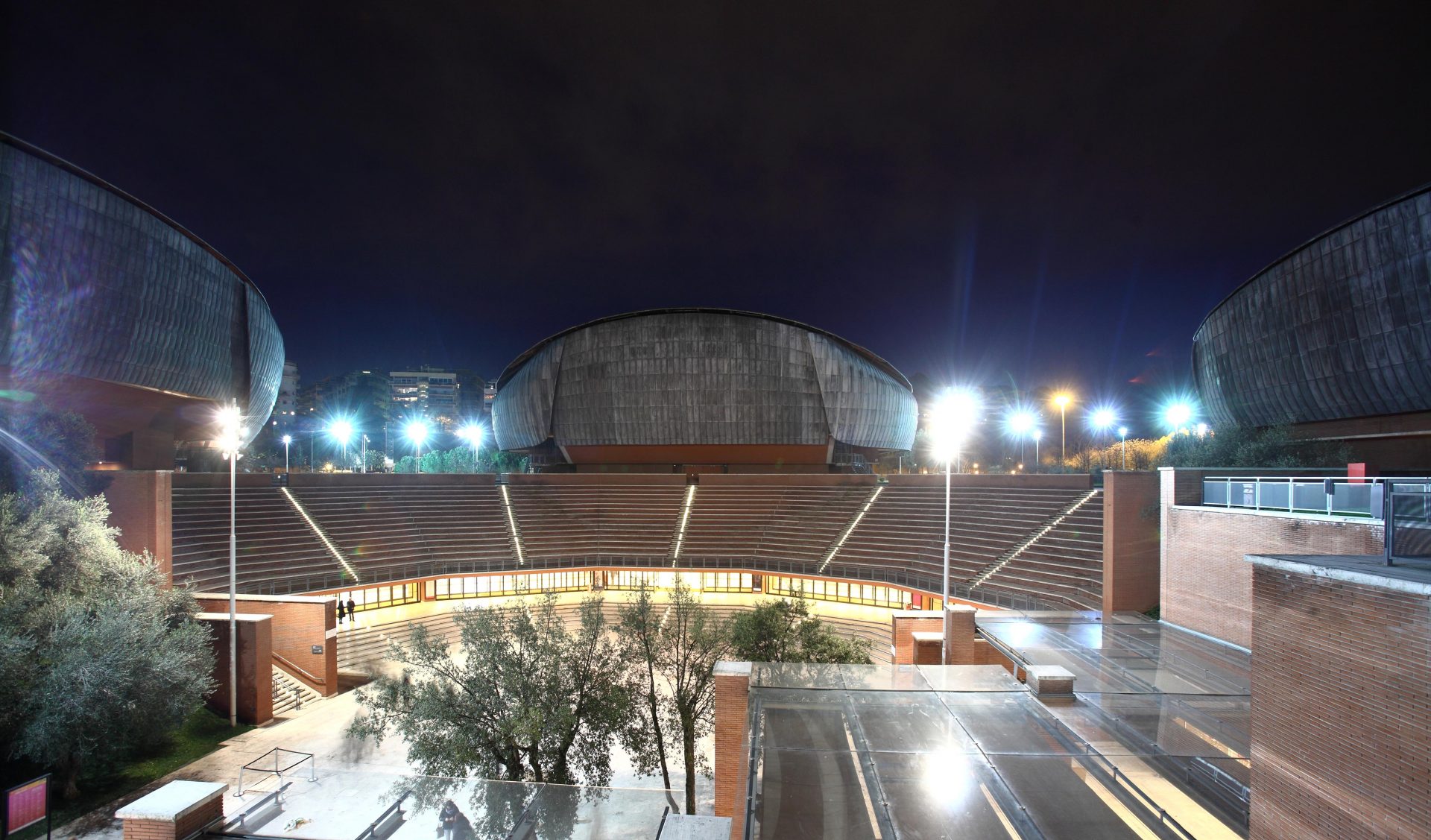 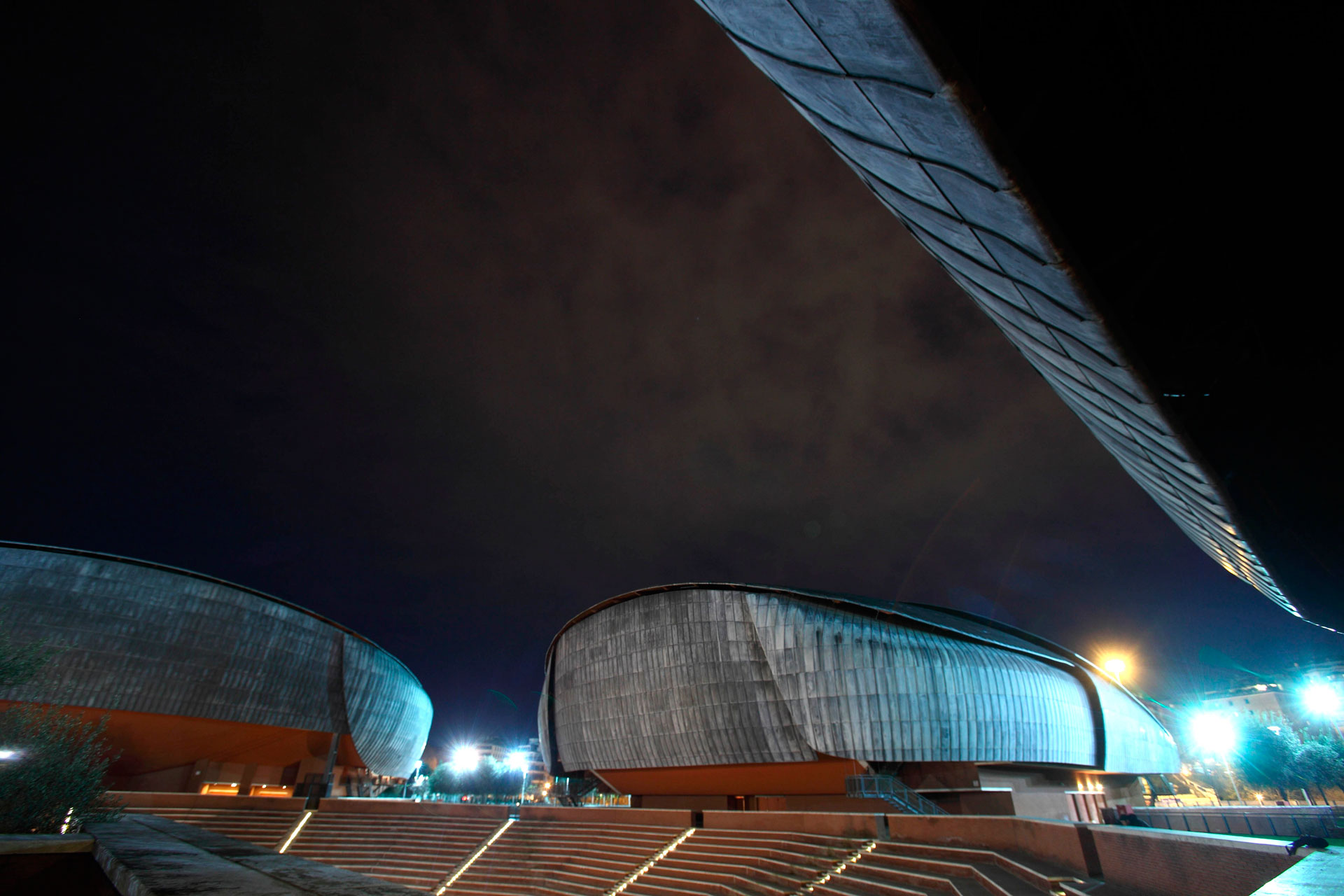 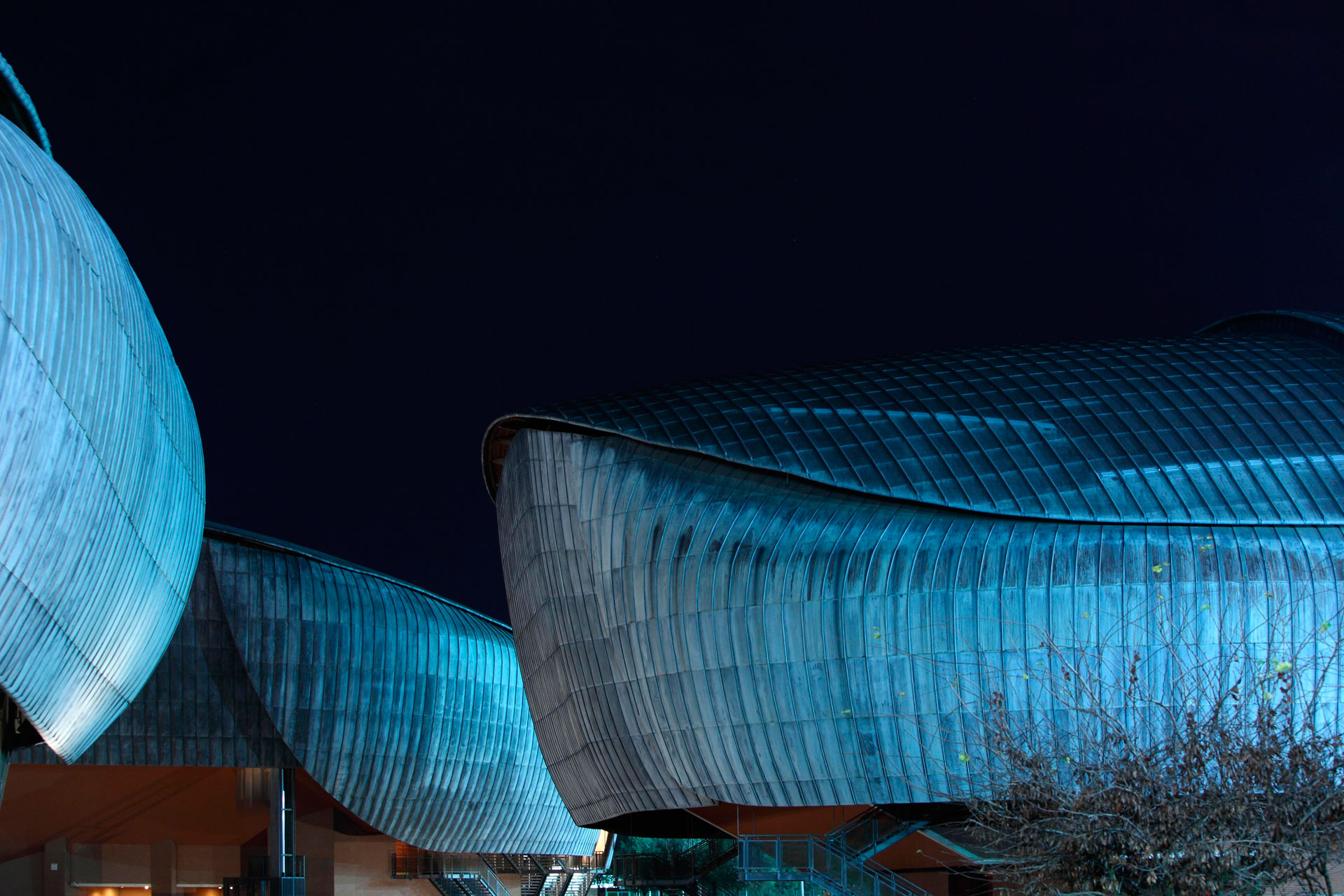 Between 1990 and 2000, it passed from around 100 concerts and events a year to the current figure of two hundred-fifty, articulated in two seasons (symphonic and chamber music), to all of which is added: a summer season, exhibitions on educational themes (“Tutti a Santa Cecilia” for children and young people of all ages), repertoires other than ‘serious music’ (“Santa Cecilia It’s Wonderful”), chamber and polyphonic choral repertoires, theme festivals, and tours in Italy and abroad.

As far as didactic and training activities are concerned, in accordance with the recent reform of the Conservatorio, the Accademia Nazionale di Santa Cecilia aims to become a centre of excellence for outstanding musical education. Soon other courses will be added to the traditional intensive high-level courses instituted by law in 1939, flanked as always by specialization courses and masterclasses that include Opera Studio, a laboratory conducted by Renata Scotto.

The historical patrimony, completely reorganised and catalogued according to the most modern technologies, has been transferred in 2005 to the new biblio-mediatech. The Accademia Nazionale di Santa Cecilia’s museum of musical instruments has been inaugurated in 2008 and it holds one of the foremost collections of instruments in Italy.