New Cd: Richard Strauss - Ein Heldenleben / Burleske | Accademia Nazionale di Santa Cecilia
This website or its third party tools use cookies, which are necessary to its functioning and required to achieve the purposes illustrated in the cookie policy. If you want to know more or withdraw your consent to all or some of the cookies, please refer to the cookie policy. By closing this banner you agree to the use of cookies.
CloseRead more 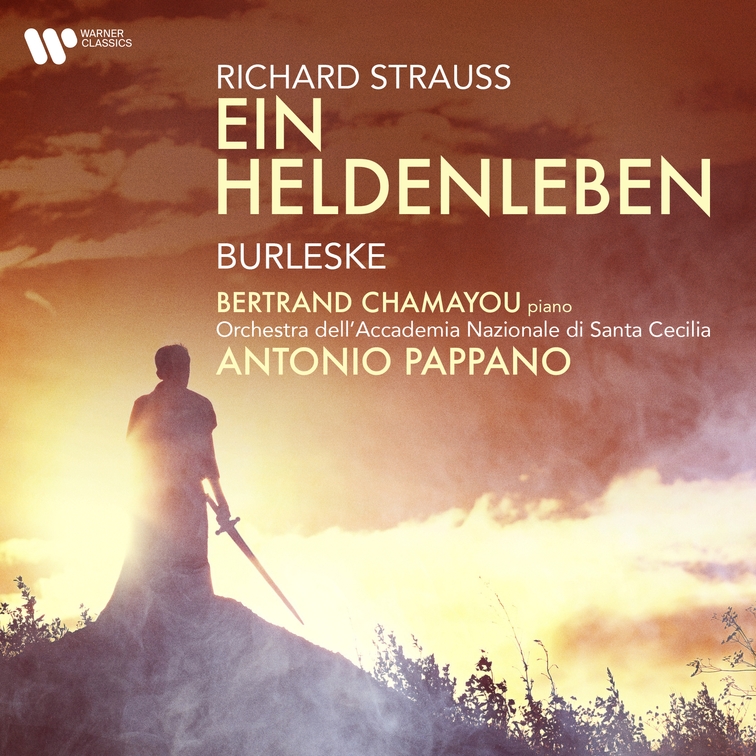 Antonio Pappano conducts the Orchestra dell’Accademia Nazionale di Santa Cecilia in two works from the earlier phase of Richard Strauss’s career: a comparative rarity, the Burleske for piano and orchestra, with Bertrand Chamayou as soloist, and the epic tone poem Ein Heldenleben, one of the composer’s orchestral masterpieces. Composed when Strauss was in his early twenties, the Burleske carries echoes of Brahms, Schumann and Liszt. Ein Heldenleben, premiered in 1899 when Strauss was 34, shows him at the spectacular peak of his early maturity.

Strauss’s first great operatic success was to come with Salome (his third opera) in 1905, but as Pappano – Santa Cecilia’s Music Director since 2005 – points out: “Strauss always thought dramaturgically. When you are recording his music in Italy, the link has to be through opera, with all its theatricality, temperament, contrast and colour. I think the cantabile, singing quality of this Roman orchestra matters a great deal, because Strauss was such a great melodist: you need a certain charisma in the sound, which these players achieve. When you look at score like Ein Heldenleben you might think it seems almost impossibly complex, but Strauss was incredibly sure-footed in the way he used the orchestra. It’s highly virtuosic. When everyone knows exactly what they are doing, the orchestral machine is really a wonder to behold.

“Ein Heldenleben – A Hero’s Life – is a fascinating piece. It’s strongly autobiographical. You get the feeling that Strauss is presenting himself as the hero.” It is not by chance that the hero’s theme is presented in the key of E flat – also the key of Beethoven’s ‘Eroica’ Symphony. “The score paints a complete picture of a human being… There’s his home life with his wife Pauline, who as ‘The Hero’s Companion’ is characterised by a solo violin played by Roberto Gonzales Monjas. As we can hear, Pauline could be both temperamental and sentimental. You almost feel like you are a voyeur on their marriage with its tensions, conflicts and reconciliations. But the piece is also about a man striving to achieve extraordinary heights, about our hero going into battle as he is attacked by critics, portrayed by cackling woodwinds.” In the section ‘The Hero’s Works of Peace’, Strauss quotes from his own works, including the tone poems Don Juan, Tod und Verklärung, Till Eulenspiegel and Also Sprach Zarathustra. “It’s as if he’s reliving his life,” says Pappano, “so that in the end he can say goodbye with calm and resigned positivity.”

Two years before his death in 1949, Strauss conducted a concert for the last time, at London’s Royal Albert Hall. The Burleske, written nearly 50 years earlier, was on the programme. Bertrand Chamayou feels it shares the mercurial spirit of Schumann’s Carnaval and Humoreske, as its title might suggest. “There is a sense of surprise – even the way it is fashioned in a single movement: it’s not really a concerto, though it lasts 20 minutes, and you never quite know where it’s going. Not only does it have a sense of humour, it has a sense of the absurd.”

Strauss originally conceived the Burleske for the pianist Hans von Bülow, a pupil (and son-in-law) of Liszt, who in 1875 had given the premiere of Tchaikovsky’s Piano Concerto No 1. Von Bülow found the Burleske excessively challenging in technical terms and dismissively refused to learn it. It was eventually premiered by Eugen d’Albert, another Liszt pupil. “Von Bülow, who had small hands, said it was impossible because the hand position had to change in every bar,” elucidates Chamayou. “It actually sometimes changes two or three times in each bar – your hands need to be as agile as a cat! Maybe this is all contributes to the element of surprise. The way composers wrote for the piano in the 20th century has accustomed us to technical demands of this kind, but the Burleske is still challenging for a modern pianist.