“Andrea Oliva is one of the best flute of his generation, a shining star in the flute world”: as Sir. James Galways speaks about Andrea, First flute soloist of the “Orchestra dell’Accademia Nazionale di S. Cecilia” in Rome, since the 2003. 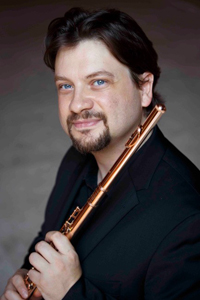 Born in Modena in 1977, graduated with the best grades in only five years at the Istituto Musicale “Vecchi-Tonelli” of Modena under the guidance of G. Betti, followed also by C. Montafia, M. Marasco, G. Cambursano, J.C. Gérard, A. Blau and Sir J. Galway as the beginning of a wonderful future career. Among the best international flute competitions he won we must mention the first prize at the Concorso Internazionale of Kobe (2005, first italian winner) and the third prize at the Concorso Internazionale ARD in Monaco (2004). Thanks to his long concert career Andrea played in some of the most important stages of the world: Carnegie Hall in New York, Museum of Contemporary Art in London min presence of the Queen Elizabeth, in the prestigious Bunka Kaikan Hall di Tokyo, at the Hong Kong Academy, in Chile and in Cuba. Already full member in the Orchestra Giovanile Gustav Mahler, Andrea attended the Herbert von Karajan Academy and has been invited, at only 23, as guest first flute at the Berliner Philarmoniker under the prestigious presence of Conductors as C. Abbado, L. Maazel, V. Gerghiev, S. Oramo, M. Jansons e B. Haitink. Personally invited by C. Abbado, he played with the “Orchestra Mozart di Bologna” and collaborates as teacher at the Academy of the same orchestra. In the same role collaborates in many different orchestras such as the Bayerische Rundfunk and Orchestra da Camera di Monaco, Bamberger Symphoniker, Mahler Chamber Orchestra and Chamber Orchestra of Europe. Andrea played many times as flute soloist with the “Orchestra Nazionale di S. Cecilia” conducted by C. Hogwood, M.W. Chung and in march 2010 by A. Pappano, with the Concert of C. Nielsen (broadcast on RAI 3 italian television). In 2012 he played the national first of the concert for flute and orchestra M. A. Dalbavie diretto da M. Honeck. Andrea is member of the GlobeDuo (flute and guitar with C. Savarese) playing in the most important italian and international seasons exploring new and unexplored repertoire for this kind of duo, moreover Andrea is also member and founder of the “Quintetto di fiati Italiano” and “I Cameristi di Santa Cecilia”. Requested and appreciated teacher, Andrea teaches at the master classes “I Fiati” of the Academy S. Cecilia in Rome, the upper-two year period in Modena and the three-year high specialization at the Imola International Academy “Incontri con il Maestro”. Nowadays is full professor of Flute at the Italian Swetzlandr Conservatory of Lugano (CSI Lugano). He recorded for “VDM Records” ‘Sonate’ per flauto e pianoforte (M. Grisanti pf), for “Le Chant de Linos” the Händel Sonate. For the magazine Amadeus “Le merle noir” di O. Messiaen and for “Wide Classique” ‘Globe’ (CD vincitore del Los Angeles Global Award 2013). Andrea published also a teaching DVD about flute (Edizioni Accademia2008) and the CD “Bach Flute Sonatas” together with the canadian pianist A. Hewitt for “Hyperion”, with whom he debuted in 2014 at the Wigmore Hall of London with acclamation by critics and audiences. Recently he published the ‘Sonatina’ of H. Duttileux and ‘Romance’ of Saint-Saëns for “Brillant” (A. Makita pf) and the “Sonata da Concerto” for flute solo and strings of G. F. Ghedini for “Sony” directed by Rusting with the ORT Orchestra.

Andrea Oliva plays with a flute Muramatsu 14k all gold SR specifically designed for him.