Carlo Maria Parazzoli | Accademia Nazionale di Santa Cecilia
This website or its third party tools use cookies, which are necessary to its functioning and required to achieve the purposes illustrated in the cookie policy. If you want to know more or withdraw your consent to all or some of the cookies, please refer to the cookie policy. By closing this banner you agree to the use of cookies.
CloseRead more

Concertmaster at Accademia Nazionale di Santa Cecilia Orchestra, with whom he has performed in the most prestigious halls with the most important International Conductors. Born in Milan, he graduated at the town Conservatory; he then achieved the “Premier Prix de Virtuosité” at Upper Conservatory in Geneva. 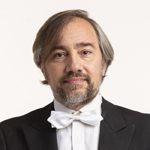 He played at leader at Orchestra Stradivari, created and directed by Daniele Gatti. He cooperated as concertmaster with the most important Italian Orchestras. He has performed as a soloist for “Guido  Chigi” quartet, Official Group of the Accademia Chigiana in Siena. As chamber musician he performed with some important musicians, such as: Sawallisch, Lonquich, Chung, Pappano, Galliano, Kavakos, Lang Lang and Martha Argerich. He played Brahms’ Double concert, Haydn’s Concertante Simphony with Santa Cecilia’s Academy Orchestra, directed by Antonio Pappano, as well as Beethoven’s Triple concert with Alexander Lonquich. He plays a Nicola Amati violin dated 1651 belonging to “Pro Canale”Foundation. He is an academic of Santa Cecilia.