Antonio Sciancalepore | Accademia Nazionale di Santa Cecilia
This website or its third party tools use cookies, which are necessary to its functioning and required to achieve the purposes illustrated in the cookie policy. If you want to know more or withdraw your consent to all or some of the cookies, please refer to the cookie policy. By closing this banner you agree to the use of cookies.
CloseRead more

At a very young age he graduated in double bass with honours at the Conservatory Antonio Vivaldi in Alessandria, under the guidance of M° Emilio Benzi and completed his studies with M° Franco Petracchi at the Accademia Walter Stauffer in Cremona.
He has won auditions and competitions at some of the most important Italian orchestras, among which the Arena in Verona (1984), La Fenice in Venice (1986), the RAI in Rome (1986, where he played steadily until 1996), the Teatro Regio in Turin (1989). In 1996, he won the competition for principal double bass at the “Orchestra dell’ Accademia Nazionale di S.Cecilia” in Rome, the position that he currently holds. 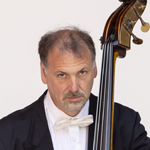 He is a founding member of the double bass quartet “The Bass Gang”, with whom he has toured the United States, Portugal, more then once Japan, Korea and, recently Germany performing with the Berliner Symphoniker. The Quartet has recorded four CDs and DVDs so far.
As the principal double bass Antonio Sciancalepore is a regular visitor of the “Orchestra della Svizzera Italiana” in Lugano.
He has also collaborated with the Mozart Orchestra led by Claudio Abbado and the Ensemble of Soloists of Europe.
As the principal double bass, he has recently been invited to be part of the chamber orchestra “Archi dell’Accademia di Santa Cecilia”
He has taught at the Conservatory of Santa Cecilia in Rome as professor of both double bass and orchestral performance practice and he is regularly invited to hold master classes in various conservatories and important institutions in Italy and abroad.