Andrea Lucchi | Accademia Nazionale di Santa Cecilia
This website or its third party tools use cookies, which are necessary to its functioning and required to achieve the purposes illustrated in the cookie policy. If you want to know more or withdraw your consent to all or some of the cookies, please refer to the cookie policy. By closing this banner you agree to the use of cookies.
CloseRead more

Andrea Lucchi has been Principal Trumpet of the Orchestra dell’Accademia Nazionale di Santa Cecilia since January 2003, when he won the orchestra audition; he previously held the same position at the RAI National Symphony Orchestra between 1996 and 2002. He has played as guest Principal Trumpet with the Orchestra Filarmonica della Scala, the Maggio Musicale Fiorentino Orchestra, the NDR Sinfonieorchester in Hamburg, and SWR Sinfonieorchester in Freiburg-Baden Baden. Since 2015, he has been engaged in collaborations with the Concertgebouw Symphony Orchestra in Amsterdam. 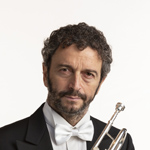 Following his 1991 victory in the ministry competition, he taught trumpet at the Conservatorio “U. Giordano” in Foggia (1992-1994) and Conservatorio “A. Buzzolla” in Adria (1994-1996). He has held master courses for: the Mediterranean Youth Orchestra in Marseille (1999), the Third International Orchestral Training Course in Gandìa, Spain (2004), the Orchestral Training Course in Lanciano (Chieti), the Master instrument course in Catarroja, Valencia (2009, 2010, 2011), and, since 2009, the Master Course for Trumpet at the Accademia Nazionale di Santa Cecilia. Since 2012, he has also been an instructor at the Accademia I Musici di Parma.