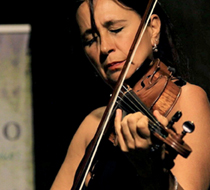 She started violin playing very young with her father. At the age of sixteen she graduated “cum laude” at the Venice Conservatory, with Giovanni Guglielmo. She attended the master classes of Franco Gulli in Siena and Nathan Milstein in Zürich; furthermore she studied with Salvatore Accardo at the “Stauffer” Academy in Cremona.In 1980 she was awarded at the “Paganini” competition in Genoa and in 1988 at the A.R.D. competition in München, where she had previously obtained the “Special Public Acknowledgment”. She has performed as a soloist with important orchestras like “Bayerische Rundfunk”, “Alessandro Scarlatti”, “I Solisti Veneti”, “S.Carlo” of Naples and “Arena” of Verona, “G: Verdi” Symphony Orchestra in Milan, cooperating with famous conductors such as Bellugi, Chailly, Gatti, Janigro, Melles, Oren, Scimone, Tchakarov. Her recording of Paganini’s 24 Caprices (Arts) has been received enthusiastically by the  press. She has recorded the complete Haydn violin concertos as both conductor and violinist with the Orchestra di Padova e del Veneto for the German label Arts.Other releases include Ravel’s complete works for violin and piano (with Giovanni Battista Rigon) and a live recording of Saint-Saëns’s Rondò Capriccioso and Vieuxtemps’ 5th Concerto, published in 2001 as a supplement of Audiophile Sound. She was invited by Salvatore Accardo to participate to the “Settimane Musicali Internazionali” of Naples. She often plays chamber music with famous artists such as Accardo, Brunello, Canino, Christ, Dalberto, Filippini, Giuranna, Kabaivanska, Mintz, Thiollier,Petracchi. She has been the violinist of the “Trio Italiano”, who won the Gui international competiton, for about fifteen years. During the same period she recorded the opera omnia of Beethoven, Schumann and Schubert. She has recorded many times for Italian, French and German broadcasting companies and televisions. She plays a beautiful violin by Ianuarius Gagliano, made in Naples in 1760.