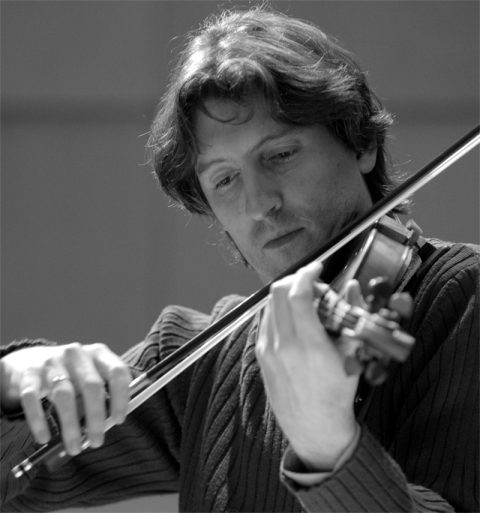 Ivan Rabaglia (1971) has been the violinist of the Trio di Parma since its establishment in 1990. He graduated with full marks, honors and honorable mention from the “A. Boito” Conservatory of mastered his studies with Franco Gulli, Stefan Gheorghiu, Giuliano Carmignola, Pavel Vernikov, Ilya Grubert, Zinaida Gilels, the Trio of Trieste (Dario De Rosa, Renato Zanettovich, Amedeo Baldovino) and with Isaac Stern at the Chamber Music New York Workshop.

In addition to the numerous radio recordings for the most important Italian, English, German, American and Australian broadcasters, the Trio has recorded widely, including the complete Brahms Trios and op. 65 by Dvořák for UNICEF, the complete trios and the Triple Concerto by Beethoven, the Trio and Sonatas by Ravel, the sonata and the trio with guitar by Giuliani for the Amadeus magazine, the first world recording of the quartets by De Fossa, Piazzolla’s Histoire du Tango, Shostakovich’s Trios and Romances for the Stradivarius label with which he won the award for best record of the year 2008 by Classic Voice magazine, the integral for trio by Pizzetti, Liszt, Schumann and Dvorak for the Concerto label, Schubert for Decca and the Cajkovskij trio, live recording at the Wigmore Hall in London, for the Movimento Classical house.

He has taught chamber music at the Trio di Trieste International School at Duino and at the Fiesole School. Former violin professor at the “Vecchi-Tonelli” Music Institute of Modena, he continued his teaching activity at the “Guido Cantelli” Conservatory of Novara and at the “Arrigo Boito” Conservatory of Parma. He also holds courses and master classes at the Academies of Biella, Pinerolo and Portogruaro.

He plays a Santo Serafino violin built in Venice in 1740, courtesy of the Pro Canale Foundation onlus.