Chailed by public and critics alike as one of the finest oboists on the international scene, Francesco Di Rosa currently holds the position of Principal Oboe at the Orchestra dell'Accademia Nazionale di Santa Cecilia. 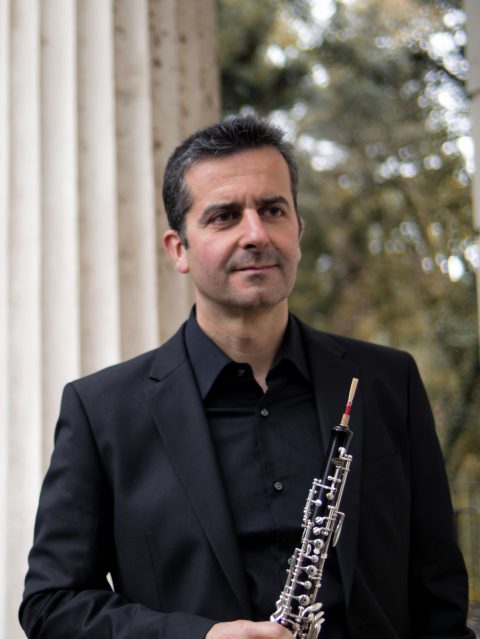 Born in Montegranaro (Fermo) in 1967, he studied with Luciano Franca and Maurice Bourgue.
From 1994 to 2008, he was Principal Oboe at the Orchestra del Teatro alla Scala and the Filarmonica, under the direction of Riccardo Muti and Daniel Barenboim.
He was awarded the second prize at the Zurich’s “Jugendmusik Wettbewerb 1988” oboe competition, and six other prizes in national chamber music competitions.
He has played in many of the most prestigious concert halls and under the baton of many renowned conductors: Abbado, Giulini, Muti, Chailly, Gatti, Boulez, Barenboim, Sawallisch, Pretre, Pappano, Maazel, Metha, Gergiev, and Chung.
As a soloist, he has played under the direction of Riccardo Muti, Myung-Whun Chung, Ton Koopman, and Antonio Pappano; as a chamber performer, he has worked with numerous important ensembles. He currently plays with Quintetto di Fiati Italiano and Cameristi di Santa Cecilia.
As first oboe, he has been invited by such prestigious orchestra as Berliner Philharmoniker, Bayerischer Rundfunk, Mahler Chamber, Camerata Salzburg, Claudio Abbado’s Orchestra Mozart, Orchestre National de France, and Orchestre de la Suisse Romande in Geneva.
He has recorded much of the oboe repertoire for EMI, Thymallus, Bongiovanni, Preiser Records, Musicom, Real Sound, Tactus, Dad Records, Aulia, Brilliant, and the magazine Amadeus.
He has served as Vice President of Filarmonica della Scala.
Artistic Director of Amici della Musica di Montegranaro, he is also a founding member of the Musicians for Human Rights movement and of the Human Rights Orchestra.
He has held master classes in leading Italian Conservatories in Germany, Spain, the United States, Japan, and Iran.
He teaches oboe in the master courses at the Accademia di Santa Cecilia.

His instrument is a Buffet “Virtuoso” oboe.