Edoardo Giachino | Accademia Nazionale di Santa Cecilia
This website or its third party tools use cookies, which are necessary to its functioning and required to achieve the purposes illustrated in the cookie policy. If you want to know more or withdraw your consent to all or some of the cookies, please refer to the cookie policy. By closing this banner you agree to the use of cookies.
CloseRead more

He graduated in percussion instruments at the “G.Ghedini” Conservatory of Cuneo with Riccardo Balbinutti, then attended two-year specialization courses at the International Academy of Music in Milan and thanks to a scholarship from the De Sono Association for the Music, he studied with Emmanuel Sejournè at the National Conservatoire in Strasburg and with Gustavo Gimeno, percussionist at the Royal Concertgebouw Orchestra. 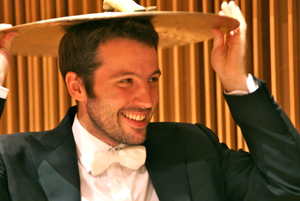 He has collaborated with various chamber groups specializing in contemporary or percussion-only music, including Divertimento Ensemble and Demoè Percussion Ensemble, and with early music ensembles such as Zefiro and the Tafelmusik Baroque Orchestra of Toronto. He is the founder of TAKT-TIME, an ensemble that involves some of the most promising young percussionists of the Italian music scene. In 2007, he won the competition for percussion of the Teatro del Maggio Musicale Fiorentino. In 2009, he won the competition at the Santa Cecilia National Academy Orchestra, within which he occupies the role of coordinator of the percussion section, and with which he also performed music by Tan Dun as a soloist. Very active from a pedagogical point of view, he is a teacher of the Advanced training courses at the Santa Cecilia National Academy and creator of the Percuss Juni project, a laboratory that deals with the musical training of children and teenagers; he has taught at the conservatories of Turin, Avellino, and Salerno and has held masterclasses for various musical institutions.