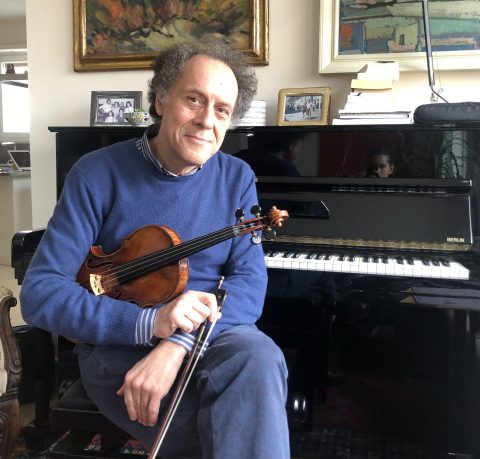 Carlo Fabiano’s violin and music training began in 1975, when he met Maestro Franco Claudio Ferrari, the historic second violin of the Orchestra dell’Accademia Nazionale di Santa Cecilia in the post-war years, who at the time was returning to Italy after a long and intense international career. One of Maestro Ferrari’s few Italian students, he received five years of instruction, following which he took his diploma with great success in violin. Subsequently in Rome, he attended the lessons and followed the advice of Maestro Arrigo Pelliccia, and at the same time began an intense professional activity as second violin and member of many chamber ensembles.
Always fascinated by chamber music and attracted by making “music together,” in 1981 he founded the Orchestra da camera di Mantova, for which he has been concertmaster, first violin, and artistic director for more than thirty years. Since that time, all his violin and music activity has revolved around this ensemble, with which he has played in the most prestigious halls and at the most important Festivals in Italy, Austria, Germany, Switzerland, Luxembourg, Belgium, Holland, Denmark, and France, as well as in the Middle East, Asia, and North, Central, and South America.
This activity has allowed him over the years to work alongside a long list of celebrated artists on the Italian and international landscape, including: Salvatore Accardo, Gidon Kremer, Uto Ughi, Giuliano Carmignola, Shlomo Mintz, Viktoria Mullova Joshua Bell, Mischa Maisky, Rocco Filippini, Miklós Perényi, Enrico Dindo, Mario Brunello, Sol Gabetta, Bruno Canino, Maria Tipo, Katia and Marielle Labeque, Michele Campanella, Andrea Lucchesini, Angela Hewitt, and the unforgettable Astor Piazzolla, Severino Gazzelloni, and Dino Asciolla.
In 1997, he received the Franco Abbiati music critics’ award for “stylistic sensitivity and methodical exploration of sonority, allowing high-level performance to create an encounter between the Italian instrumental tradition and the classical repertoire.”
In recent years, he has been strongly committed to conceiving and carrying out numerous innovative projects that have circulated a great deal, gaining extraordinary attention from the Italian music world: between 2002 and 2004, with Umberto Benedetti Michelangeli, the “Progetto Beethoven,” a revisiting of the Bonn genius’s symphonies and concertos in chamber form, following the latest critical revisions; and between 2004 and 2007, “MozartFest,” a cycle dedicated to W.A. Mozart’s religious music. And with Alexander Lonquich, he performed W. A. Mozart’s complete piano concertos, an effort met with great enthusiasm by numerous concert societies on the international landscape. Between 2008 and 2010, he devoted his efforts to a major project around the figure of Franz Josef Haydn on the occasion of the bicentennial of the composer’s death. His most recent effort, in May 2013, was the unique “Trame sonore a palazzo” Mantua Chamber Music Festival, an informal and innovative international meeting of chamber musicians in the Renaissance palaces of Mantua.
Much of this concert activity has been recorded by RAI, Bayrischer Rundfunk, Rsti, Dutch radio, as well as Hyperion and a number of other record labels.
Always interested in teaching-related issues, since 1980 he has been violin professor – the chair his mentor occupied before him – at the Mantua Conservatory, and in 2010 was appointed instructor in the Master Course in Chamber Music at the Accademia Nazionale di Santa Cecilia in Rome.
He plays a Cremonese violin made by Gian Battista Cerutti in 1848.