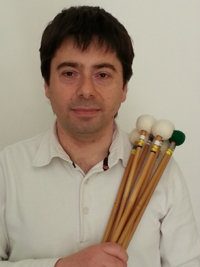 Earlier, he held the same position for ten years at the Orchestra del Teatro San Carlo in Naples, where he won the xylophonist-percussionist competition. Born in 1971, he studied at Conservatorio San Pietro a Majella in Naples, earning a diploma cum laude.
He led the Cameristi del San Carlo, and as guest first timpanist he has worked with the Orchestra della Radio Svizzera Italiana, the Orchestra Filarmonica Arturo Toscanini, the Orchestra del Teatro alla Scala, and the Orchestra Filarmonica della Scala. He performed Bela Bartok’s Sonata for two pianos and percussion in the Accademia Nazionale di Santa Cecilia chamber music season (Martha Argerich and Nelson Goerner were the pianists). He has served on panels in national and international competitions (Teatro alla Scala, Teatro dell’Opera di Roma, Premio Nazionale delle Arti, etc…).