Andrea Conti has been Principal Trombone of the Orchestra dell'Accademia Nazionale di Santa Cecilia since 2003. A pupil of professors Giulio Gabbiani and Giuseppe Mangione at the "Giuseppe Verdi" Music School in Prato, he took his diploma in 1985 at 18 year of age as a private student at Livorno’s Istituto Musicale "Pietro Mascagni. 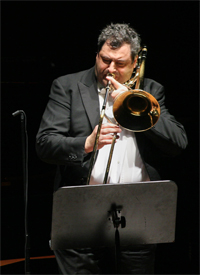 He subsequently studied with Vinko Globokar at the Fiesole Music School and with William Cramer, lecturer at Florida State University. He continued his studies with American teachers both in Chicago and in master classes in Italy, Switzerland and Germany under Jacobs, Kleinhammer, Vernon, Crisafulli and Alessi, among others. He has won auditions at the Orchestra Sinfonica dell’Emilia Romagna “Arturo Toscanini” and the European Union Youth Orchestra EUYO, as well as competitions at Teatro San Carlo in Naples, Teatro dell’Opera in Rome, Milan’s Teatro alla Scala, “Maggio Musicale Fiorentino” at Florence’s Teatro Comunale, Munich’s Bayerische Staatsoper, and the Accademia Nazionale di Santa Cecilia. He has worked with a number of institutions, and with such conductors as Abbado, Maazel, Chung, Giulini, Mehta, Prêtre, Muti, Bychkov, Scimone, Sawallisch, Sinopoli, Pappano, Tilson-Thomas, and Salonen. He has engaged in intense chamber activity with the Armonia d’ottoni ensemble, with the Ottoni Fiorentini brass quintet, with Bayerische Staatsorchester’s Opera Brass group, and with the Italian Brass Quintet and the Italian Brass Ensemble. For nine years, he taught Trombone and Tuba at the Scuola di Musica “Giuseppe Verdi” in Prato, and has been invited by important theatres and orchestras as panel member for auditions and competitions. He has held master classes and performed concerts for various institutions in Italy and abroad.