Andrea Zucco | Accademia Nazionale di Santa Cecilia
This website or its third party tools use cookies, which are necessary to its functioning and required to achieve the purposes illustrated in the cookie policy. If you want to know more or withdraw your consent to all or some of the cookies, please refer to the cookie policy. By closing this banner you agree to the use of cookies.
CloseRead more

Andrea Zucco has been Principal Bassoon with the Orchestra dell’Accademia Nazionale di Santa Cecilia of Rome since 2006 and is Bassoon Professor of the Royal Northern College of Music of Manchester (RNCM) and of the Scuola di Musica di Fiesole (Florence). He used to be a member of the Rome Opera House (2001-2006), of the Mahler Chamber Orchestra (1999-2002) and of the Gustav Mahler Jugendorchester (1996-1998). 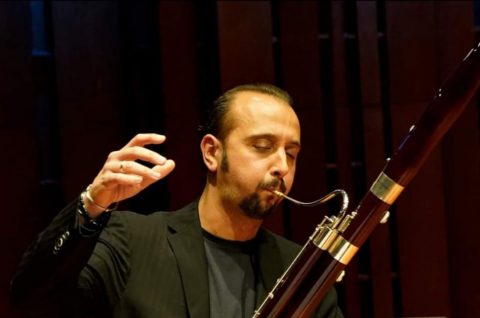 As Principal Bassoon Andrea has performed all over the world with Symphonieorchester des Bayerischen Rundfunks, Bayerisches Staatsorchester, La Scala Theater of Milan, Mahler Chamber Orchestra and Deutsche Kammerphilharmonie. In 2008 he was personally invited by Claudio Abbado to play Strawinsky’s Firebird at the Musikverein of Wien with the Lucerne Festival Orchestra. Alongside Claudio Abbado, Andrea works regularly with conductors such as Lorin Maazel, Valery Gergiev, Kirill Petrenko, Daniel Harding, Antonio Pappano and Gustavo Dudamel.
As a soloist, Andrea has performed in many festivals, including the Verdi Festival of Parma and the IDRS conventions.

In 2019 he was in the jury for the ARD bassoon competition in Munich.