Stefano Novelli | Accademia Nazionale di Santa Cecilia
This website or its third party tools use cookies, which are necessary to its functioning and required to achieve the purposes illustrated in the cookie policy. If you want to know more or withdraw your consent to all or some of the cookies, please refer to the cookie policy. By closing this banner you agree to the use of cookies.
CloseRead more

Born in Rome in 1967 into a family of musicians, Stefano Novelli began learning music with his father. He entered the Conservatory of Santa Cecilia studying in the class of prof. Vincenzo Mariozzi and, at the age of 17 years, he graduated with honours. 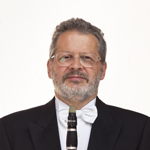 Initially his repertoire and early recordings were for RCA, EDIPAN, labels which eventualy led him to play in chamber groups as well as other formations.
He performed with renown soloists such as M. Argerich, A. Lonquich, B. Canino, M. Quarta, M. Campanella, H.J. Schellenberger etc.
Still a student, he was selected for the “EUYO” performing in the most important European theatres.
Since 1992 he has been the principal clarinet of the orchestra Accademia Nazionale of Santa Cecilia in Rome and has performed with outstanding conductors e.g. Giulini, Sawallisch, Pretre, Gatti, Bernstein, Rostropovic an Thielemann.
As principal clarinet he has made unique appearantly with the RAI Orchestra of Rome, the Teatro dell’Opera of Rome, Solisti Aquilani etc.
He is frequently invited to perform and lead masterclasses and courses with various musical associations.