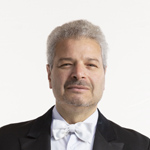 Raffaele has won various principal-violist concourses: in 1982 in Naples and Florence, in 1984 in Bologna and in 1987 in Rome Opera Theatre and in Orchestra dell’Accademia Nazionale di Santa Cecilia. In 1991, he has been invited by the latter, for “recognized prestige”, to hold office of principal solo violist.
He has cooperated with numerous chamber ensembles, as principal violist as well as a soloist, examples are the Nuovi Virtuosi di Roma, the Solisti Italiani, the Santa Cecilia Chamber Orchestra. He has played for the principal Italian and international music institutions.
Recently, Raffaele has joined the Bach Ensemble, headquarters in Monte Antico (Tuscany), as solo-violist, extending his solo repertoire thus including rarely performed music.

He is a founding member of the Stradivari Sextet.