Luigi Piovano | Accademia Nazionale di Santa Cecilia
This website or its third party tools use cookies, which are necessary to its functioning and required to achieve the purposes illustrated in the cookie policy. If you want to know more or withdraw your consent to all or some of the cookies, please refer to the cookie policy. By closing this banner you agree to the use of cookies.
CloseRead more 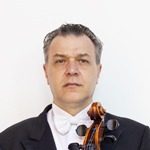 He has performed as soloist with orchestras as Tokyo Philharmonic, Accademia di Santa Cecilia, Montréal Symphony and Seoul Philharmonic under the batons of such conductors as Chung, Menuhin, Nagano, Pappano and Pletnev. As a sought-after chamber musician, he has played with artists as Sawallisch, Chung, Sitkovetsky, Kavakos, the Labèque sisters and Antonio Pappano, with whom he regularly performs in duo since 2005.

He has worked as Principal cellist of the Symphony Orchestra of National Academy of St. Cecilia since the end of the 1990s.

Among his forthcoming débuts, Puccini’s Tosca in Catania Opera House and concerts with Mozarteum Salzburg Orchestra, in 2022.