Libero Lanzilotta | Accademia Nazionale di Santa Cecilia
This website or its third party tools use cookies, which are necessary to its functioning and required to achieve the purposes illustrated in the cookie policy. If you want to know more or withdraw your consent to all or some of the cookies, please refer to the cookie policy. By closing this banner you agree to the use of cookies.
CloseRead more

Born in Cosenza in 1964, he completed most of his musical studies in Florence at Conservatorio Luigi Cherubini. Under the guidance of Alfredo Brandi for double bass and Franco Cioci for composition, he took his diploma in the double bass in 1983 with top marks and honours, and attended master courses with Franco Petracchi. 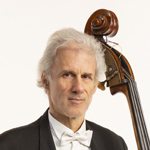 Immediately upon earning his diploma, he joined ORT-Orchestra della Toscana, later becoming its principal double bass. He has also won a number of competitions at the most prestigious Italian institutions, including Accademia Nazionale di Santa Cecilia, Teatro Comunale di Firenze, and Teatro alla Scala. He has lent his collaboration to several chamber ensembles, working in duet with piano and as a soloist with orchestra. From 1984 to 1993, he was double bass instructor at Scuola di Musica di Fiesole, subsequently performing the same role at Menton Music Conservatory (France). From 1993 to 1998, he was principal double bass soloist in the Orchestre Philharmonique de Monte-Carlo, with which he also served as soloist, and was double bass instructor at Académie de Musique Prince Rainier III in Monaco. He is regularly invited to teach courses and master classes in Italy and abroad. He has for many years cultivated an interest in early music on original instruments, collaborating with various specialized groups, and is a founding member of Accademia Barocca di Santa Cecilia.