Gabriele Geminiani | Accademia Nazionale di Santa Cecilia
This website or its third party tools use cookies, which are necessary to its functioning and required to achieve the purposes illustrated in the cookie policy. If you want to know more or withdraw your consent to all or some of the cookies, please refer to the cookie policy. By closing this banner you agree to the use of cookies.
CloseRead more

Gabriele Geminiani was born in Pesaro, he graduated with first-class honours and an honourable mention; he played as a soloist with different orchestras like O.R.T. (Tuscany Orchestra), Orchestra dell'Accademia Nazionale di Santa Cecilia and I Pomeriggi Musicali, under the guidance of conductors like Chung, Pappano, Poppen, Nagano. 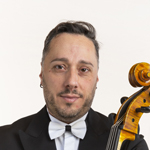 In 1997, in Paris, in the occasion of the international competition “M. Rostropovich”, he won the special prize for the best performance of the piece “Spins and Spells” by Saariaho. In 1998 he won the cello competition and became first cellist at O.R.T. in Florence and in 1999 he won another competition in the Orchestra dell’Accademia Nazionale di Santa Cecilia of Rome, where he still holds the place of  Principal Cello.

He played as principal cello with the Orchestra Filarmonica della Scala and with Symphonica d’Italia ; he regularly works with Orchestra Mozart, Mahler Chamber Orchestra and with the Lucerne Festival Orchestra at the invitation of Claudio Abbado. He made records for La Bottega Discantica and for Decca.

He plays a “Carlo Giuseppe Oddone” cello crafted in 1903.