David Romano | Accademia Nazionale di Santa Cecilia
This website or its third party tools use cookies, which are necessary to its functioning and required to achieve the purposes illustrated in the cookie policy. If you want to know more or withdraw your consent to all or some of the cookies, please refer to the cookie policy. By closing this banner you agree to the use of cookies.
CloseRead more

David Romano is the Second violin section Leader of the Symphonic Orchestra of Accademia Nazionale di Santa Cecilia. Born in Naples in 1972, he graduated in his city Conservatory with M° Aldo Pavanelli. 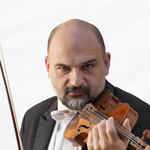 In the Master Academy of Portogruaro, David has attended several Master Courses by Pavel Vernikov and Zinaida Gilels.
In 1999 David has achieved his Konzert Diplom in the Musik Akademie der Stadt of Basel, as a fulfillment of a three years Bachelor in Adelina Oprean’s konzert Klasse.

David has attended Chamber Music Courses by M° Piero Farulli, Dario De Rosa, Milan Skampa in Scuola di Musica di Fiesole. A key figure to the development of David’s career has been Giuseppe Principe, with the support of whom he has tackled the repertoire for concertmeister.