Andrea Obiso | Accademia Nazionale di Santa Cecilia
This website or its third party tools use cookies, which are necessary to its functioning and required to achieve the purposes illustrated in the cookie policy. If you want to know more or withdraw your consent to all or some of the cookies, please refer to the cookie policy. By closing this banner you agree to the use of cookies.
CloseRead more

Born in 1994, he is one of the youngest violinists in the world that received his first major degree with honors and special mention at only fourteen years old.

Considered by critics an “enfant prodige”, he began studying violin with his father at age six and after a year he made his debut recital with his mother, pianist.

Being very fast at mastering the instrument, Andrea made his debut as a soloist at age thirteen with the "Fondazione Orchestra Sinfonica Siciliana" performing H. Vieuxtemps Violin Concerto No. 5. 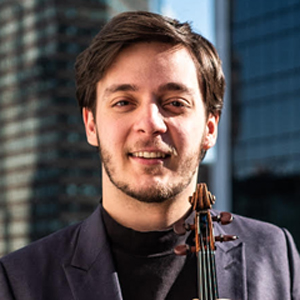 Andrea Obiso won the “66th ARD International Competition 2017” in Munich (Germany) where he also won the special prize for the best performance of the world-premiered work “For Solo Violin” written by Avner Dorman.

Andrea is an “Artist Diploma” student at the world-renowned “Curtis Institute of Music” in Philadelphia where he studies with Aaron Rosand under the “Eileen Rosenau Fellowship Program.” Furthermore, he studies conducting, counterpoint in composition, improvisation and aesthetics of music with the professors and his mentors Jonathan Coopersmith, Noam Sivan and Ford Lallerstaedt.

From 2005 to 2015, he has been the youngest student admitted to the Accademia Chigiana in Siena (Italy) in the studio of Boris Belkin, with whom he studied also at the Maastricht Conservatory.

He has an impressive solo and chamber music repertoire. His list of 34 violin concertos includes those of Tchaikovsky, Brahms, Sibelius, Saint-Saens, Mendelssohn, Mozart, Paganini, Glazunov, Dvorak, Strauss, Prokofiev and many others.

He has participated in several TV Shows and Radio Programs on BR-KLASSIK in Germany, on RAI 1 in Italy, and was a guest artist in many prestigious festivals as the “Festival of the Two Worlds” in Spoleto, the “Fontainebleau Music Festival” in Paris, “Sagra Malatestiana” in Rimini and the “Linari Classical Music Festival” in Florence.

In earlier seasons he made his debut in Moscow, at the Kremlin, with “The Moscow Virtuosi Chamber Orchestra” and Vladimir Spivakov, conductor, then in Japan and China. His 2016-2017 season kept Andrea on Tour in Europe, in Latin America (Mexico, Argentina, Uruguay and Chile) and to make his debut at the Herkulessaal and at Gasteig Philarmonie in Munich. In 2018 Andrea toured Germany and Finland. He also made his debut at the prestigious Berlin Philarmonie with the Deutches Symphonie Orchester Berlin presented and recorded by Deutschlandfunk Kultur.

Andrea Obiso has just been appointed Concertmaster of the Orchestra dell’Accademia Nazionale di Santa Cecilia. He will share the position with Carlo Mmaria Parazzoli.