Alfonso González Barquín | Accademia Nazionale di Santa Cecilia
This website or its third party tools use cookies, which are necessary to its functioning and required to achieve the purposes illustrated in the cookie policy. If you want to know more or withdraw your consent to all or some of the cookies, please refer to the cookie policy. By closing this banner you agree to the use of cookies.
CloseRead more

Alfonso was born in Madrid (Spain). He studied trumpet with José Miguel Sambartolomé and Luis González in his homecountry and continued his studies in Germany with Reinhold Friedrich and Laura Vukobratovic. He also studied privately in France with Pierre Thibaud and the United States with Thomas Hooten.

During his studies, he was member of the Spanish National Youth Orchestra, the Iberoamerican Youth Orchestra (conducted by Gustavo Dudamel), as well as academist at the Düsseldorfer Symphoniker. 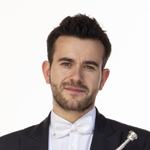 Alfonso was member of the Orchestra Mozart in Bologna (Italy) under the baton of Claudio Abbado and the West-Eastern Divan Orchestra, conducted by Daniel Barenboim.

He has worked as principal trumpet with the Duisburger Philharmoniker (Deutsche Oper am Rhein) and the Mannheim Nationaltheater Orchester in Germany. He has played regularly with different orchestras, including his appearences as guest principal trumpet with the Royal Concertgebouw Orchestra in Amsterdam, the Rotterdam Philharmonic, the Royal Scottish National Orchestra, the KBS Symphony Orchestra in Seoul-Korea, the Freiburg Baroque Orchestra, and the National Orchestra of Belgium among many others.

After being appointed principal trumpet at the Brussels Philharmonic in Belgium, from 2018, he holds the same position at the Orchestra dell´Accademia Nazionale di Santa Cecilia in Rome. He also teaches at the Conservatory “Musikene” in San Sebastián (Spain).