Alessio Allegrini | Accademia Nazionale di Santa Cecilia
This website or its third party tools use cookies, which are necessary to its functioning and required to achieve the purposes illustrated in the cookie policy. If you want to know more or withdraw your consent to all or some of the cookies, please refer to the cookie policy. By closing this banner you agree to the use of cookies.
CloseRead more 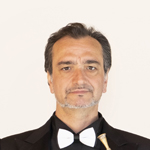 The winner of major honours and international prizes, including the Prague Spring Competition and the A.R.D. Competition in Munich, he has held solo concerts conducted by Abbado, Chung, Muti, Pappano, and Tate. As an instructor, he holds master classes at the Royal Academy of Music (visiting professor), the Royal College, the Guildhall School of London, and the Birmingham Conservatory, as well as at prestigious universities in Latin America and Japan. Since 2019, he has been horn instructor at Conservatorio della Svizzera Italiana.
As conductor, Allegrini is invited on a regular basis to lead such orchestras as Hamburger Symphoniker, Tokyo Philharmonic, Orchestra del Teatro Lirico di Cagliari, Orchestra Filarmonica Marchigiana, Lausanne Chamber Orchestra, Istituzione Sinfonica Abruzzese, and many others, collaborating with world-renowned soloists like Maria João Pires, Hélène Grimaud, Isabelle Faust, Ilya Gringolts, and Imogen Cooper.
His commitment to social issues has taken him to various parts of the world in support of projects aiming to improve societies via music education: he is a founder of the “Musicians for Human Rights” movement, in which he created the “Human Rights Orchestra,” where he has been Music Director since 2010. In 2006, he received in Italy, from Fondazione Exodus di Don Mazzi, the “Premio Nazionale la casa delle Arti” prize for his ability to combine professional commitment and life style. His recordings include Mozart’s Horn Concertos and Sinfonia concertante for winds and Bach’s Brandenburg Concertos performed with Orchestra Mozart conducted by Claudio Abbado (Deutsche Grammophon), and La Grande Fanfare, a chamber anthology of horn pieces, with Quartetto d’archi della Scala. Allegrini has also taken part in two documentaries: L’altra voce della musica in viaggio con Claudio Abbado tra l’Avana e Caracas, and L’orchestra with Claudio Abbado.
Allegrini plays a Dürk D10 “Allegrini experience,” an instrument that he himself conceived.