Alessandro Carbonare | Accademia Nazionale di Santa Cecilia
This website or its third party tools use cookies, which are necessary to its functioning and required to achieve the purposes illustrated in the cookie policy. If you want to know more or withdraw your consent to all or some of the cookies, please refer to the cookie policy. By closing this banner you agree to the use of cookies.
CloseRead more 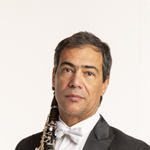 He has achieved honours in the most important international competitions: Geneva, Prague, Toulon, Munich, and Paris. Since his debut with Geneva’s Orchestre de la Suisse Romande, Alessandro Carbonare has performed as a soloist with, among others, the National Orchestra of Spain, the Oslo Philharmonic Orchestra, the Bavarian Radio Symphony Orchestra, Orchestre National de France, Wien Sinfonietta, the Berlin Radio Orchestra, the Tokyo Metropolitan Orchestra and all the leading Italian orchestras.
He has recorded most of the repertoire for Harmonia Mundi and JVC Victor and has given important impetus to new music for clarinet, commissioning new concertos from Ivan Fedele, Salvatore Sciarrino, Luis De Pablo, and Claude Bolling.
A passionate lover of chamber music, he is a member of Quintetto Bibiena and works on a regular basis with such eminent artists and friends as Mario Brunello, Marco Rizzi, Pinchas Zukerman, Alexander Lonquich, Emmanuel Pahud, Andrea Lucchesini, Wolfram Christ, Trio di Parma, Enrico Dindo, Massimo Quarta, Luis Sclavis, Paquito D’Rivera, and many others.
With interests ranging beyond “classical” music, he also performs in jazz and klezmer programmes, and has had important collaborations with Paquito D’Rivera, Enrico Pieranunzi and Stefano Bollani.
A Guest Professor at some of the world’s leading conservatories (Royal College of London, the Juilliard School in New York, Conservatoire de Paris, Tokyo University of the Arts) he has been a panel member in all the most important international clarinet competitions (Geneva, Munich, Prague, Beijing, “K. Nielsen” in Denmark, and “B. Crusell” in Finland).
At Claudio Abbado’s personal invitation, Alessandro Carbonare joined the Orchestra at the Lucerne Festival and the Orchestra Mozart as Principal Clarinet; with the Orchestra Mozart, again under the leadership of Maestro Abbado, he recorded Clarinet Concerto K622 for Deutsche Grammophon, a production that earned him a 2013 Grammy Award.
In his social commitment, he has lent his support to projects contributing towards improving society through music education; in this area, he assisted Claudio Abbado for the Orquesta Simón Bolívar social project as well as for the children’s orchestras of Venezuela.
His CD for Decca, “the Art of the Clarinet” was a great success, and the satellite channel SKY-CLASSICA produced a portrait of him for its series I Notevoli.