Adriana Ferreira | Accademia Nazionale di Santa Cecilia
This website or its third party tools use cookies, which are necessary to its functioning and required to achieve the purposes illustrated in the cookie policy. If you want to know more or withdraw your consent to all or some of the cookies, please refer to the cookie policy. By closing this banner you agree to the use of cookies.
CloseRead more

Born in Cabeceiras de Basto (Portugal), Adriana Ferreira studied at the Artave Music School with Joaquina Mota. Laureate of the Calouste Gulbenkian Foundation in Lisbon, she studied with Sophie Cherrier and Vincent Lucas at the Paris Conservatoire, where she graduated. She also studied with Benoît Fromanger at the Berlin Hochschule Hanns Eisler and holds a Musicology Degree from the Sorbonne University. 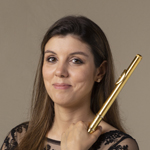 In 2010, Adriana won the First Prize, Orchestra Prize and Audience Prize at the Carl Nielsen International Competition in Denmark. In 2013, she was awarded 3rd Prize at the Kobe Competition in Japan, before obtaining First Prize of the Severino Gazzelloni Competition in Italy. In 2014 she won joint 2nd Prize (1st Prize was not attributed) at the prestigious Geneva Competition, where she also received the Coup de Cœur Breguet Special Prize. She published two CD’s as a duet with pianist Isolda Crespi, followed by a CD as a soloist with the Geneva Chamber Orchestra.